Object of study and boundary conditions are identical to the turbine cascade, that described in the previous section, with the exception of the relative height of the blade, which in this case amounted to l/b = 0.714. Complex lean was carried out according to 2-nd method without changing the stagger angle of the profile.

Using proposed algorithm (section 6.4) the optimal blade’s shape of the specified turbine guide blade was found on the sixth step of the variation parameters range refinement.

All 56 configurations of turbine blades shape were counted.

To solve the same problem using genetic algorithm, probably, hundreds of calculations would have required. The Table 6.1 shows the best value of the varied parameters and the best value of target function for each of the optimization stages.

Fig. 6.14 shows isolines of the objective function in the space of parameters Ys and Yh.

Lines of equal values of the objective function have incomplete shape due to the fact, that the obtained values of the function are distributed unevenly, and most of them are situated in the neighborhood of line Ys = Yh. Dots on the Fig. 6.14 display the values of the parameters Ys and Yh on every stage of the optimization study. Comparison of Fig. 6.14 and Table 6.1 allows to see how the history of the changes Ys and Yh looks like.

Partial filling in by the calculation points of depicted area associated with large labour-intensive calculations and inability to evenly fill in the entire area. However, the carried out calculations are sufficient to argue that the domain of the minimum values of the target function was found. It is located near the center of the study area.

Fig. 6.14 shows that the objective function in the domain of minimum values has been changing slightly, which means that there is some freedom in choosing the optimal values of Ys and Yh.

Fig. 6.15 depicts the distribution of the losses coefficient of kinetic energy.

Indeed, looking at the optimized turbine blade (Fig. 6.17), we can see that in the bottom part of the blade the positive lean takes place and the negative lean has place at the top. It gave the possibility to obtain, predicted in the previous subsection, pressure distribution in the blade passage (Fig. 6.18) and on the suction side of the blade (Fig. 6.19), in other words, to combine the positive effects from simple leans, excluding the negative implications. 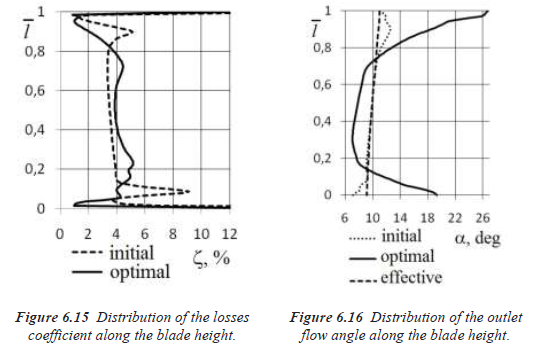 Some calculated characteristics of initial and optimized blade cascade has shown in the Table. 6.2. It is worth to note that mass flow rate and actual outlet flow angle has changed, and this changing is in the order of 10%. Changing of the outlet flow angle and, as a consequence, the mass flow rate is connected with changing of flow structure in the cascade and with reduced losses. 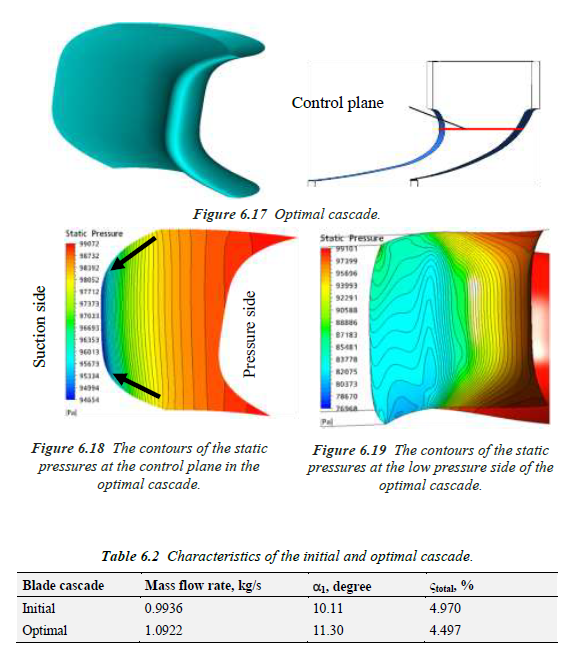 As a result, it can be stated that the proposed method gave the possibility to find the global minimum of the function, but the increase of the mass flow rate in the optimal cascade by almost 10% is unallowable.

So in further when conducting optimization this should be taken into account and the changing of the mass flow rate should be restricted by imposing an additional parameter of variation Δβs.