Everyone knows that APUs need love too…..

For Valentine’s Day, we want to look at an underdog of turbomachinery. A machine that is often overlooked, and not really in the limelight the way some of its larger cousins are, nor is it given the trendy position of being the “technology of the future” like its smaller cousins. Without this technology, airplanes would be entirely reliant on external power plants to maintain an electric power supply on the ground, and to start the main engines. So, what is this underappreciated machine?

If you haven’t been able to guess it, our Valentine this year is the aircraft auxiliary power unit, or APU for short. Although these are not present on all aircraft, they are typically used in larger airplanes such as commercial airliners. This allows aircraft to rely less on ground services when the main engines are not running. As a result, less equipment, manpower, and time are required to keep the plane in standby mode, and the aircraft can also service airports with less available resources in remote locations.

Where this Underdog Started

The aircraft auxiliary power unit can be traced back to the First World War, as they were used to provide electric power onboard airships and zeppelins. In the Second World War, American bombers and cargo aircraft had these systems as well. APUs were small piston engines, as the gas turbine had yet to be developed. These engines were typically V-twin or flat configuration engines, similar to what you might find on a motorcycle, and they were called putt-putts. These two-stroke engines usually put out less than 10-horsepower, but that was all that was required to provide DC power during low-level flight.

The German air force also used their own version of the putt-putt during the war, but these engines had a different function from their American counterparts. Instead of providing electrical power via a generator, these engines were starting systems for the first generation of jet engines used in Germany’s fighters. Designed by Norbert Riedel, these small engines would be pull-started, similar to an outboard engine for a boat, or a snow blower.

Once running, they would turn the jet’s compressor through a mechanical linkage, and allow the jet to start. These early APUs were hidden inside the nose of the engine, with the pull handle at the front of the nose, as seen below.

This setup proved to be a valuable option, as it meant the jets could operate with less support equipment. A common alternative to an onboard power unit, was and still is to utilize an air cart or “start cart”, which carries a compressor or a supply of compressed air. The cart is attached to one of the engines via a hose, and blasts a large volume of compressed air into the starter/engine, allowing the turbine to spool up.

Although the German military had pioneered the use of auxiliary power to ignite the main engines, it wasn’t until the Boeing Company launched the Boeing 727 in the 1960s that the APU made its debut in commercial aviation. This allowed the 727 to be operated at smaller airports with less ground support, as the auxiliary unit provided the aircraft with onboard HVAC, electrical power, and engine starting capabilities.

Simple, they look like gas turbine engines, but instead of being coupled to a large-bypass fan or being fitted with a thrust nozzle, they are coupled to a shaft and generator. It is similar to a turboshaft gas turbine like that in a turboprop, or in a power plant (albeit much larger).  As you can see in the graphic below of a Hamilton Sunstrand (now Pratt & Whitney) APS5000, there is typically a centrifugal compressor stage, driven by an axial turbine stage, with another turbine stage on a separate shaft to drive the generator.

Why Are they Underdogs in Turbomachinery?

Part of why the APU does not get much love comes down to visibility; they’re not seen by the public. Since they are tucked in the tail of the plane, all you see is the exhaust port. Yet these little turbomachines do so much for the pilots, passengers, and all onboard an airliner.

Modern APUs do both tasks that its American and German ancestors did, by providing electrical power through a generator, and using bleed air for climate control and engine ignition when the main engines are offline. The centrifugal compressor can supply bleed air while the aircraft is on the ground at the gate, and as it is being pushed back, until it is time for the engines to spool up. When you are on a larger commercial airplane, you’ll notice that it gets very quiet for a minute during the pushback from the gate and that the lights may go dim. This is because the APU is bleeding off all of the air that normally gets used for air conditioning and rushing through the air starter in one of the turbofan engines.

Once the plane has one engine online, the bleed air from that engine can be used to start the other engines. Here APU is shut down until the plane has landed at its destination. In this way, an APU can be thought of as the Master of Ceremonies at a stage show, or as the opening act for a comedian, providing you and the crew with the comforts of air travel until the engines come on and the show really begins.

One notable incident where the APU was critical to the safe operation of a plane was the famous “Miracle on the Hudson”, where Captain Chesley “Sully” Sullenberger successfully ditched an Airbus A320 in the Hudson River between New York City and New Jersey, saving all 155 souls onboard. The plane, known as flight 1549, had suffered a bird strike when both engines ingested geese shortly after taking off from LaGuardia airport in Queens. A critical step for Sully in the time after both engines shut down, was to switch on the auxiliary power unit, which provided a source of electrical power for the stricken aircraft. The National Transportation Safety Board (NTSB), wrote in its report of flight 1549, “Despite being unable to complete the Engine Dual Failure checklist, the captain started the auxiliary power unit, which improved the outcome of the ditching by ensuring that a primary source of electrical power was available to the airplane and that the airplane remained in normal law and maintained the flight envelope protections, one of which protects against a stall,” (1). Although it was certainly not the only reason why flight 1549 did not end in a tragedy, the APU was critical to aiding Captain Sullenberger successfully ditching the aircraft.

So this Valentine’s Day, show a little love for a turbomachine that isn’t big and flashy – one that does not make the hairs on the back of your neck stand as it spools up, but does keep you comfortable while you wait for that thrill. Save the turbofans, turbochargers, and turboexpanders for another day. Today is all about the aircraft auxiliary power unit, and the attention it definitely deserves. Happy Valentine’s Day! 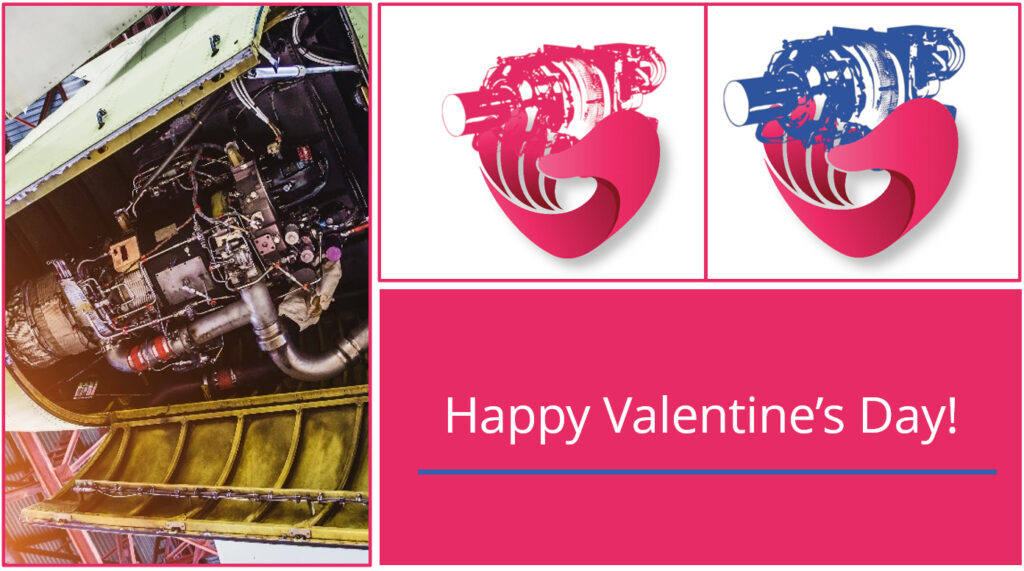 Do you design or rerate auxiliary power units? See how the AxSTREAM platform can be used to do everything from simulating Brayton cycles to conceptual designs of the compressor and turbines, as well as perform rotor dynamics, simulate secondary flows, and getting these results in a few hours.